Previous Next
What’s Your Superhero Power? 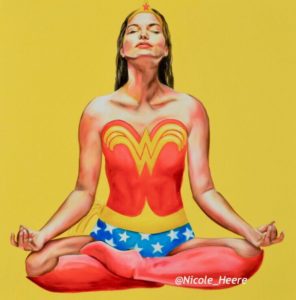 I was recently listening to NPR and they were interviewing Lulu Wang about her film, “The Farewell.” Something Wang said struck such a cord in me. She was talking about how one of the actresses had used humor her whole life to dissipate tension and energy in difficult moments – internal and external. For this actress, humor was her superhero power and Director Wang encouraged the actress to instead stay in places of discomfort throughout the filming. Wang went on to say that this was the secret sauce to this actresses’ performance and that it made for a deep shift in the way the film ultimately came out (a big winner at Sundance Film Festival).

As Wang described this process, so many strong emotions ran throughout my body. I recalled from a young age being described as “too sensitive” and thinking that my sensitivity was a flaw. I was an only child and played on a big farm by myself as a young child. My friends were animals, the flowers and trees in spring, summer, and fall and the snow during the winter; my friends were imaginary and seen only by me. The flowers, animals, and my imaginary friends were sensitive too and I thought this was the way to be in this world, until it was made clear that it was not.

I think that’s around the time I discovered my superhero power – I was quick-witted and funny. Since then, when my body and emotions would feel something very strongly, I would use humor to dissipate the sensations at my heart space that apparently weren’t helpful and were somehow, “wrong.”

Fast-forward through the next 30 years or so and I can see how these superhero powers translated into other patterns and habits in my life. When humor wasn’t enough, I busted out the tough-girl bootstraps. The tough-girl bootstraps helped to further create a persona – Kelly Voss was not only quick-witted and funny, but she was also tough and able. She could handle any situation – she was not too sensitive to take it on. But of course this wasn’t true…and so all of this dissolution of the raw experience lent itself to a split feeling within. On the one-hand I was succeeding in life, I was capable, I was magnetic and funny, but on the other hand I was a completely tortured soul. And so, my superhero powers got me a lot of things I wanted, but the cost was high for me and increasingly I found myself needing to numb out. Whether through busyness, booze, or risk-taking, I was avoiding at all costs the fact that I walk through this world feeling both the joys and all of the sadnesses very deeply.

Our time on the cushion invites us to be exactly with what is in this very moment. When I stepped into the world of yoga asana and meditation, I began to feel into my lifelong sensitivity. Like the actress in Wang’s film, my secret sauce has now transformed into sitting with all the sensations — all the feels. Being with all this world offers us – the absolute ecstasy and the absolute shit – and everything in between. This practice invites us to feel into our superhero powers and whether they are serving a higher purpose in helping us to wake up to the raw experience of our lives. Why would we want to do so, you might ask. Our highest Truth and Purpose for our short life will reveal itself to us when we make ourselves vulnerable enough to feel into exactly what that is; unadulterated and without the labeling that accompanies judgment.

You will be free to be you – perfect, whole, and complete just as you are…with a little room for polishing up!

Want to explore your superhero powers? Dive into this 30-minute meditation practice. May the force be with you on your journey.

Superhero Powers Meditation from The Mind Oasis on Vimeo.