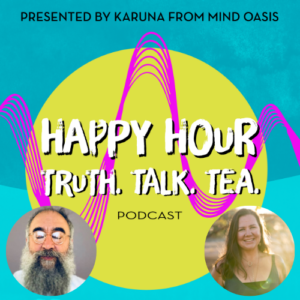 LISTEN TO THE PODCAST

Hector Marcel, beloved meditation guide, Dharma teacher, and President of Three Jewels in New York City, shares the power of meditation. He specifically teases out the power of Analytical Meditation to work with emotions like anger, sadness, and more. On this episode of Tea, Talk, and Truth with Karuna, he and Karuna take a deep dive into shamatha and analytical meditation and the dance between the two, as well as the power of guru yoga. Hector Hla is Karuna’s heart teacher and this episode is quite special to her.

Hector shares, “The first time I successfully and I’ll talk about this in the [Analytical Meditation] master class. The first time I successfully learned an analytical meditation, I debated in my mind whether my experience of anger from a triggering reality experience with someone was really them. Being terrible people is that way I felt anger. Or is that other place that anger came from? And so you learn a little bit about the philosophy of where the possible causes for an experience can be. And then you apply that learning to your meditation, you go, OK, let’s take the position that that person is the source of my anger. Every time he’s around, I’m angry, therefore they’re at fault, and I should get away from them and all this other stuff, right? Or I should attack or whatever our strategy is. But before the strategy, we have to understand, is that really the source of anger? For me, that was my first serious analytical meditation. And then you come up with a question mark in your mind, is that true? And you try and prove that it is true that they are the source of the problem. Meaning everybody that touches them has the same problem because if they’re the source of the problem, then they’re radiating that shittiness that makes you angry. And when you can’t find full evidence for that to be true, you’re in trouble.

That part of your mind is in trouble. You have to come up with, well, where could it be? What about him in just this situation, etc.? Right? So you keep questioning, but you can see already that the gap between what you were sure before is beginning to open and you could be falling down that I don’t really know where my anger comes from. It seems to be now. You’re less certain are, you know? And in that less certain, this is a shift in this space. And if you’re earnest, if you’re true to yourself, you will want to find out exactly where it is so you could stop it either for yourself or for those around you. So when I did that and I got to read some eastern philosophy books and so on, and all the other possibilities were anger could be. Then I got to see that, oh, it’s it’s an energetic response that then turns into a mental and verbal response. I don’t have to act on that. And when I tried that, I didn’t always get angry. Oh my goodness. All of a sudden I had a power that I didn’t know existed when I believe the anger came from outside of me. So basically, you’re playing chess with yourself, going prove to yourself that that is the place where anger comes from and then prove to yourself that that’s not where it comes from and then prove to yourself.

And in that ping ponging you, it is a little discombobulated. You feel a little loose and lost, but it’s your lab. Your meditation is your container to experiment with understanding. And through that process, something will ignite. You’ll get an aha moment, that moment of awakening that and knowing that you didn’t know before. And if you have the prior type of meditation that I talked about, where you’re able to maintain focus on something when you get that awakening moment, you just put on your single pointed concentration on that and watch the implications of that sort of dissolve the misunderstanding in your neuroconnection, your brain. It begins to it’s like a domino effect. It’s like, if that’s not true, then your brain has to work. It will do it naturally to dissolve all the misunderstanding, and you will have a moment of aha awakening of insight, you know, in Sanskrit. Vipashyana. And so you need this both.You ne ed analytical meditation to bring you to an AHA. And then you need a single point of concentration to stay on that A-ha. So clearly that it dissolves a misunderstanding when you get off the cushion.”