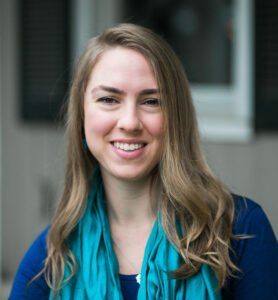 Kaleigh was born and raised in Austin, TX, where her meditation journey began. After suffering from two herniated disks in her early 20s and being forced to pause her yoga practice, she began exploring meditation. She quickly realized that making friends with her mind was the best thing she could do not only for herself, but for everyone in her life. Soon after, she took a deep dive and participated in the 300 Hour Meditation Teacher Training through Dakini Meditative with the lovely Kelly Lindsey.

The mountains were calling and she chose to relocate to Colorado in June of 2019. She lived and worked for just under a year and a half at Tara Mandala, a Buddhist meditation retreat center.

Kaleigh is completely in love with mountain life and loves to spend free time outside in nature, preferably near pine trees and running water. She also loves learning, visiting independent bookstores, and connecting with friends— both new and old. She graduated from LSU with a BA in English Literature, and still loves to read.  Kaleigh currently lives in the tiny town of Bayfield, CO, with her wonderful partner and their two puppies, Harper and Jalu.